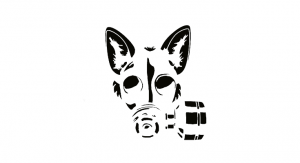 They often call it a gift.

Far too often over the preceding years, when I have allowed myself to be so brashly ignoble as to actually share some of my haltingly hesitant words, I have heard that particular phrase being uttered with what I am sure were genuinely earnest intentions.  And I always struggle to hold my tongue and simply make awkward acknowledgement of the objectively unwarranted good graces of their kind intent.

But it is not a gift.

And yet, neither is it wholly a curse.  It instead finds an elusive definition somewhere in the middle, seldom seen and running deviously unnoticed in the encroaching shadows, just like the mischievous fox, slinking his way cunningly cautious through the darkness of another Indiana summer night draped so mournfully over the slumbering City of Wayne.  The solitary fox who regrettably finds himself so painfully devoid of either kith or kin to help comfort him through the locked-down storms threatening.

A tragic creature destined to always watch from the periphery.  Forever standing observantly on his guard, senses hyper-tuned to the rhythm of the worlds around him, both natural and artificial.  A life inhospitable to standing still, even for the briefest moment.  Unless it is to stalk an unsuspecting prey caught exposed on the naked hunt.

A translucent caricature never once allowed to relax from endlessly chasing down the story of his next tomorrow fast approaching in the morning’s first light.  The light that he instinctively fears.  The light that too often brings the false focus of an underserved praise.

I’m convinced, after years of “boots on the ground, heart in the gutter” research, that the qualities that make me a fairly decent writer are probably what make me such a disappointingly tragic lover.  My stubbornness in adhering to the inherently strict and unfiltered black and whites of honesty has caused more problems than it ever solved.    My questionable and sometimes temporary opinions permeated nearly every conversation shared and every argument passionately fought, sometimes just for the sake of enjoying the barbed wordplay that I always somehow misunderstood to be foreplay.  Or my incessantly festering belief that the final story always matters more than the individual characters, inadvertently denying those closest to me the opportunity to be singularly treasured for their own merits, rather than for their unwilling contributions made under the (broken) promises of a love undying.

And that is not a gift.

That is my shame.

I realize now that I am nothing more than an emotional toddler, playing unsupervised with his collection of literary matches, waiting to spark the fire, just to watch his world burn.  Again.  I realize that I have accidentally become an emotionally unstable black hole, greedily consuming everything around me in the faintest hope of finding the next words to fill that next blank page.

That often becomes an accidentally unintentional addiction of sorts, given enough time and enough matches with which to play.  Because I often catch myself thinking that maybe if I drink that next bottle, or smoke that next smoke, or swallow that next pill, then maybe the words will find a welcoming doorway through my inhibiting reservations long enough to come out and play on the page.

That is not a gift.  That is traumatic self-destruction.  And it fucking hurts.

But then, being a writer is like having soul-crushing homework- for the rest of your life.  Homework that is always terminally late before it was even ever assigned, filling you with “the fear” from the very outset of the instinctually creative assignment.  Homework that lacks the benefit of a clear syllabus initially provided, leaving you unstructured and unsupervised, but still somehow accountable as you try your best to create a meaningful outline.  Or if you happen to be indecently lucky, maybe a satisfactory conclusion to the story still unfolding and still so very much misunderstood.

And if that truly is a gift, I wouldn’t expect it to hurt this bad.  Because sometimes, it really does fucking hurt.    Sometimes the sacrifices made in order to get words on the page take literal time off my life, the minutes exchanged willingly in pursuit of the words.  Sometimes the constant picking at old wounds leaves me emotionally bloody, an exhaustedly wounded shell of the man I could have been, had I not so foolishly answered the muse’s seductive siren song calling.

But, I did answer.

And I have no one to blame but myself.