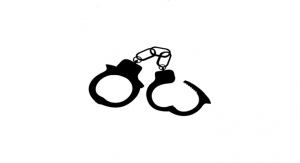 I am harboring a fugitive tonight and it is the weight of social consciousness weighing heavy upon my soul.

Hurtful and hateful things are being said everywhere, constructing emotional tinderboxes that are just waiting for that spark.  Insults and derogatory remarks are printed, posted, and shared in a seemingly ceaseless stampede of social notifications.  Tragedies are daily unfolding in our streets, streets that for so long have been insulated from the scourge of violent rioting and protest, but are now left burning and curtained in the choking veneer of tear gas clouds hanging low.

Even here, in this little flyover City of Wayne, usually so conservatively polite and deeply steeped in hesitant Midwestern reserve, I was tear gassed and shot with pepper bullets multiple times.  By my own police department.  Without benefit of warning or a safe exit route provided.

My only documented crime was my participation in a peaceful protest.

But despite the aggression, I stayed unflinchingly peaceful in those smoke-filled street, boots literally on the ground, adding my voice to the chorus of others crying out so desperately for meaningful change.

Those personal choices made have been met with a variety of reactions from those around me, covering the spectrum from vehement disagreement, to heartfelt support for having run the gauntlet of an overly militarized law enforcement presence literally itching at the trigger to hurt those whom they originally swore to serve and protect.

But then I’m reminded that this whole country was literally founded in crucible of radical, and sometimes violent, protest and the destruction of property, both personal and public.  It is our communal heritage and in our universal pedigree to use our voices, and sometimes our bodies, in angry organized protest of unjust policies and attitudes.

Those earliest of divisions in a newly formed United States continued to simmer just under the surface long after the Revolution, occasionally breaking free in the ever-changing tides of political maneuverings and cultural shifts as the country became so manifest in the pursuit of its destiny.  It wasn’t until we fought a horrifically brutal Civil War that our national identity was finally cemented and even then, there were numerous unresolved residual effects left with which we still currently struggle to even acknowledge, let alone attempt to solve.

I am deeply ashamed to admit this, but for the sake of honesty and earnest transparency, I feel that I must be upfront regarding my experiences.  For a large portion of my life I have held unmitigated hatred in my heart.  There is some solace to be found in knowing that that hatred was never based upon race or the color of a person’s skin, but rather was instead directed at those responsible for centuries of cultural and religious oppression and division.

Yet, it was still hate.

And that hate ended up costing me so very much over the years, as I watched helplessly as my friends were either buried, or imprisoned, one by one.  Each one a tragic and unique loss, though admittedly some hurt far worse than others.  For the longest time I foolishly let those feelings of rage-filled loss fan the flames of hatred burning unchecked within me, costing me dearly in both my health and my mental well-being.

And in the end, it was conversation and compromise that eventually fostered a hesitant peace and provided a fragile and tentative unity.  Not the threats.  Or the bullets.  Or the bombings.  Or the blood.

That is why I have since steadfastly defended the rights of those with whom I might not necessarily agree.  That is why I feel that every voice, unless it outwardly advocates for hate or racism, deserves to be heard.  It allows the avenues to open for having the conversations which, for the benefit of the entire country, and all of its generations, we so desperately need to begin having.  Conversations about race and cultures.  About the over-militarization of our police forces.  About the officials we elect to represent us who so often fail to live up to their campaign promises so easily bought and sold.

Everyone has a voice.  And every voice matters.  If one person who sees an injustice should stand unafraid in the threats of the one, or the dozens, or the many thousands responsible, it can be the beginning of a desperately needed change.  And you might just be the voice that ultimately turns the tide.  But, you have to make your voice heard, either through pen, social media, or your vote.

Hatred and anger will only keep us in the dark.  And you can never defeat the darkness with more darkness.  Only the light can show the way.

Regardless of age, politics, gender, sexual orientation, or economic background, I think perhaps the one point upon which we might all agree is that we, as a nation, can do better.  That we can be better than this, if we only allow ourselves to be by the simple fact of accepting that we are all fundamentally the same tragically fragile creatures.

And maybe we can use that small starting point as the springboard to come together and begin having those difficult conversations which will allow us to figure out how to make that better world happen- for everyone.

The only other option is for us to surrender to the hate and I simply refuse to ever go down that fucking ugly path again.