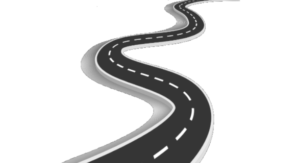 It always comes back to roads.

In almost five decades of summers, I’ve run down a lot of roads.  Sprawling interstates.  Back country lanes scratched out of the holler.  Familiar flyover county lines strapped on a grid of rigid Midwestern flatness.

Asphalt and Michigan gravel; concrete and Georgia clay.  Ocean views and cement tunnels that felt like coffins.  Even foreign motorways with their strange signs and nonsensical flow.

Always pushing the posted limits.  Ignoring responsible rest areas for the promises hiding just up ahead, behind that next mile marker.  Stopping only long enough to tank up on gas station chemicals; burning tobacco on an endless loop.  Mashing a path through muddled playlists, struggling to find the most significant copilot to help fill the space between miles.

Boomeranging down through the blasted mountain passes of I-75.  Slingshotting west on Mulholland in that rented red convertible, chasing the fading warmth of the falling California sun.  Escaping across the face of a roundabouted English countryside in the middle of the night, pushing hard to catch that early morning transatlantic Heathrow flight.

For years, I had myself convinced that I was running towards something meaningful.  A good story.  The next disastrous kiss.  The ridiculous notion of a fresh start.  Even though they somehow always ended up stale.

And then suddenly, I stopped moving.

In the clarity of the resulting stillness, I realized I had only ever been trying to run away.

Away from the man I was when I had to watch my friends die.  Away from the bombings and bricks and hate of another marching season.  Away from the love I was so fucking desperate to find, though I never once understood it.  I just knew that I wanted it.  And committed any number of regrettable sins to get a taste.

Roads ultimately leading nowhere were a distraction that helped sustain me.  They gave me focus.  And an excuse to move.  They provided legal stimulation to counteract the encroachment of less favorable influences always threatening to gain ground.  Because anything is better than being bored.

But roads are meant for the young.  Because old bones ache now when bouncing over potholes that seem to get deeper every year.  The inertia of age draws lethargy into the constriction of the day to day, making even mundane tasks feel insurmountable.  Withering bank accounts flinch at pump prices.

Sometimes, late in the evening when this little blue house echoes empty, I sit at the front window and stare at the road out front.  The same little asphalt cut-through I’ve lived beside for too many years now.  And in my head I think of the places to which it has connected me.

It was the gateway to the Tennessee foothills.  And Michigan peninsulas.    California coastlines and Louisiana bayous.

Thousands of miles spent running; thousands of dollars spent with nothing much to show.  Except the occasional rescued typewriter.  And a pile of shitty manuscripts telling shittier stories that too few dare to read.

Things were different when I was out on the road. I miss the rush of freedom.  Maybe when the weather breaks, I’ll go back out there again.

But tonight, as the last of winter refuses to relinquish her grip on these flyover fields of dead corn, I remain frigidly still.  And drink to the memory of all the miles I left behind my tires.

Because it was one hell of a ride…